Glenn Harper appeared on ABC RN this morning with Cassie McCullagh. Glenn and Cassie discuss the concepts behind Brutalism, and it’s history in Australia.

“Brutalist architecture is somewhat out of vogue these days – with many example being demolished to meet the insatiable demand to build residential apartment buildings. But should many of these buildings be added to the heritage lists and treasured?”

“You find it ugly, I find it lovely…”

These words are from Kenneth Slessor’s poem “William Street”, written in 1939 and still studied by high school students around Australia.

And it’s also the central dilemma of on the mind of architect Glen Harper.

He’s concerned about the fate of Australia’s Brutalist buildings which he says are being demolished in increasing numbers.

That’s particularly so in Sydney and Melbourne where the demand for land for residential projects seems insatiable.

Part of the problem is that many of these buildings are their own worst enemies – they’re rather, well, uncompromising.

The international movement originated with the Swiss-French Architect Le Corbusier and the term béton-brut” – French for “raw concrete”.

Think of the High Court or the National Gallery in Canberra, the UTS building in Sydney, the Harold Holt pool in Glen Iris.

Should we be treasuring these buildings rather than demolishing them?

Listen to the segment online at: http://www.abc.net.au/radionational/programs/lifematters/building-brutal—the-beautiful-beasts-of-brutalism/7803972 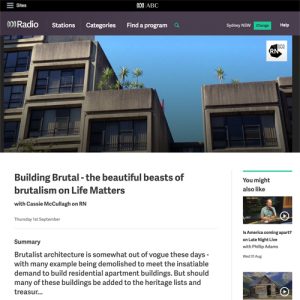