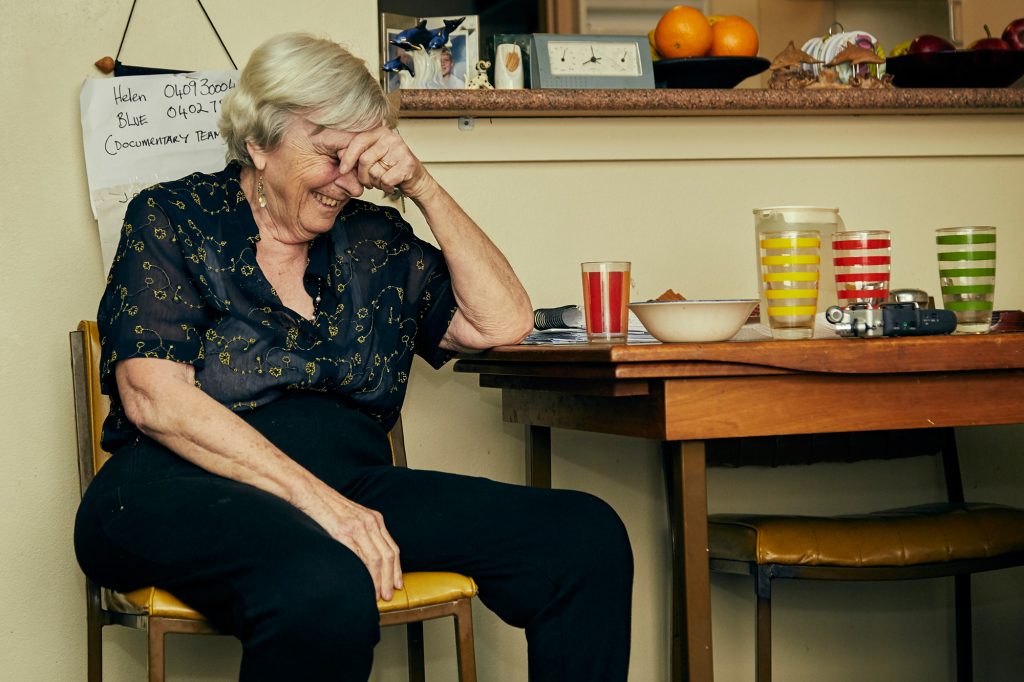 Myra Demetriou passed away on 23 October 2021 at the age of 94. She is remembered not only as the face of the Sirius campaign but also as the last public housing tenant forced out of Sirius.
Inside Myra’s apartment on the tenth floor of Sirius, every night from November 2014, a set of lights flashed a message across Sydney Harbour and The Rocks: SOS, Save Our Sirius. 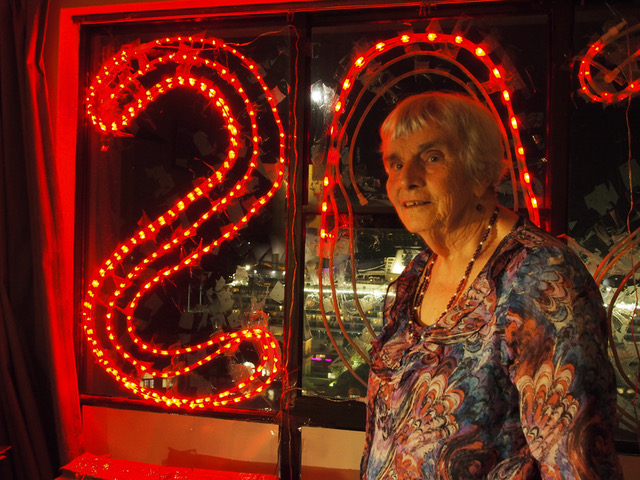 SOS is the international distress signal and in late 2014 the residents of Sirius were in distress. A few months earlier the NSW Government had told them they would be moving to ‘new homes’ along with all other public housing tenants in The Rocks, Millers Point and Dawes Point. Some had lived in the area all their lives. Others had family ties going back generations.
Residents in the Sirius Apartments, and many others throughout Millers Point, knew they could turn to Myra for comfort and advice following the March 2014 announcement of the planned displacement of all public housing tenants. When a community picnic to celebrate the community was held in September 2014, Myra responded by baking eight dozen scones. Before Christmas 2016 Myra bought 48 kilograms of dried fruit and nuts to bake Christmas cakes for friends, family and many of the people suffering from the stress of the displacement process. These were the two things Myra could do for people: she could listen to them and she could cook for them.
The design of Sirius and its adaptations for disabled living, plus the support of her community, allowed Myra to live independently despite her advancing years, limited mobility and blindness. During the Save Our Sirius campaign, Myra welcomed more than 1500 visitors to her home so that they would have first-hand experience of Sirius.
Between 1959 and 1970 Myra lived in Erskine Street with only a fuel stove for cooking and a copper for hot water. When her home was demolished to build the Western Distributor, she moved to 18 Trinity Avenue behind the Garrison Church. Myra began caring for her next-door neighbour Billy who suffered from scoliosis, but due to her poor eyesight, she was refused the small carer’s allowance usually provided by the government.
Eventually, Myra had to escape the steep and dangerous stairs of her Trinity Avenue house. In 2008 she agreed to move around the corner to Sirius. From there Myra regularly travelled by bus on her own to attend lectures at the Mechanics Institute and State Library, and to shop for groceries, and regularly she walked to the local community centre and to church.
For thirty years Myra was the volunteer curator of the Military and Historical Museum attached to the Church of the Holy Trinity, known as The Garrison Church for its close connection with the armed forces. The Church of the Holy Trinity has been a preeminent venue for remembrance services for regiments associated with World War 2 and the Korean and Vietnam Wars. The Military and Historical Museum was an important addition to these services. During the period Myra ran the museum she also enlisted and organised a team of volunteers drawn from people attending these services. Myra was an active member of the Holy Trinity congregation for more than fifty years, has been a deaconess, and was Secretary to Bishop Donald Cameron for seven years.
Myra was a member of the Labor Party for more than 30 years, and as recently as 2017 she was the Senior Vice President of the Darling Harbour Branch. She was an active member of Labor committees and was the final speaker at the 2017 NSW Labor Party Conference where she received a standing ovation for calling on the government to retain diversity and social housing in the centre of Sydney.
Although elderly, frail, in poor health and almost totally blind, Myra was inspiring in her support for others, in her unwillingness to accept limitations due to her disabilities, and in her determination to defend Sirius. At every opportunity, Myra would ask reporters, ‘Are we to live in the only major city in the world without social housing?’
Shaun Carter described Myra’s role in the Save Our Sirius campaign:
Myra reminded us that being good and decent and community-minded makes a wonderful and meaningful life – too often we forget these simple but necessary building blocks of society that hold and bind us together.
Myra also reminded us that great people live in all our communities. She reached across divides with her wit and warm smile, disarming as she went. This also gave her the strength to stare down a limited and narrow government consumed by money and little else. Without Myra SaveOurSirius would not have been as potent and as successful. She was the face of our campaign and the heart of Sirius.
Myra was a great Sydneysider, a much-loved member of her many communities and a fearless soul. We all loved Myra, and Myra loved us all. Vale Myra – we will certainly miss you.
—John Dunn