The NSW Government is preparing to sell Sirius. This will result in the demolition of a significant heritage building, the final destruction of a community, the trashing of the government’s own heritage system, the tarnishing of its reputation, and personal anguish for those who have lived in this neighbourhood for fifty years and more. The one thing the current plan for selling Sirius will not deliver is the $100 million the government says it expects.

The Save Our Sirius Foundation has been working on alternatives to put before the government. What follows is one alternative that would save the building, retain a significant portion of social housing in Sirius, pay for its refurbishment, and still deliver $100 million to the government. It would be good to be able to discuss this and other alternatives with the government before it forces out the last remaining residents.

A representative of Family and Community Services has written to the residents of Sirius to say the NSW Government is making plans to sell Sirius and suggests the sale will provide funds to house 1000 vulnerable people – the homeless, parents with disabled children and others amongst the 60,000 on the waiting list.

No-one would side with a few recalcitrant residents in Sirius standing in the way of 1000 vulnerable people being housed. However, the author has not disclosed the grounds on which his numbers are based, only responding during a recent forum hosted by Shelter NSW that they are based on ‘a calculation’.

Could the ‘calculation’ be based on selling Sirius for $100 million? If such an amount were used to construct 330 dwellings at an average of $350,000 each, with each housing an average of three people, this would account for one side of an equation, the cost of providing homes for 1000 people.

The other side of the equation is why a developer would pay $100 million for the Sirius site. Earlier this month, the NSW Government announced it had sold two of its finest sandstone heritage buildings, each covering an entire city block in the heart of Sydney. The Lands and Education buildings were sold together for $35 million. A ten-fold increase on this sum would have been a more reasonable expectation in the eyes of most Sydneysiders.

So why would the Sirius site be worth three times as much? Certainly not so that a developer could replicate the existing floor space within the existing envelope. Two years ago,  it was reported (in the Sunday Telegraph) that Minister Brad Hazzard wanted the 79 units of Sirius replaced by 250 luxury apartments, and thereafter his comments about selling Sirius focused on his calls to ‘Show me the money’. The Hazzard plan would produce a building that would overshadow The Rocks and dominate the precinct that includes the Sydney Harbour Bridge and the Opera House.

Several NSW Ministers have proposed alternative visions for the Sirius site that would be less dominating, but presumably these would also reduce the return to the government when the building is sold. The recent Green Ban placed on Sirius by the CFMEU and endorsed by Jack Mundey and many others, makes demolition of Sirius problematic, which in turn would further reduce its value when it comes time for the government to sell it.

The government’s current course of action appears unlikely to deliver the $100 million the government had hoped for, and if it proceeds, it might be another case of the government settling for a tiny proportion of a site’s value due to circumstances beyond its control. What if there were a plan to sell the Sirius apartments and deliver $100 million to the NSW Government? What if that plan also saved Sirius from demolition, at the same time saving the government from trashing its own heritage program and allowing Sirius to be recorded on the NSW Heritage Register, as advised unanimously by the experts appointed by the government? And what if the government was able to retain about thirty Sirius apartments for social housing and the Millers Point community? Would this be a plan worthy of government consideration?

The plan is simple enough. Sell fifty Sirius apartments, including all those on the fourth floor and above. Many of these apartments have fabulous views of the harbour and Opera House, and an average price of more than $2 million seems reasonable to expect, or more than $100 million overall. A few Sirius residents might move from one unit to another, or the government might wait until residents like Myra, who is blind and turns ninety next week, no longer need their flats.

The most recent High Rise Asset Management Plan for Sirius advises the building requires minimal repair, but does suggest good options for upgrading and maintaining the building to meet contemporary standards. There is a way to fund this work within this plan. If the value of the 29 units retained for social housing is taken into account, and estimated at the cost of $350,000 per unit for providing accommodation elsewhere, this provides about $10 million for refurbishment and repair of Sirius.

In 2014 Sirius was included in the government plan to sell its Millers Point properties, but it appears to have been a last-minute addition to the plan. The Baird government inherited this plan and has steadfastly kept with it. The Save Our Sirius Foundation has been seeking an opportunity to discuss alternatives with the government, and now the timing is critical. Could Mike Baird save Sirius and a community or will he feel he must stay with a plan that will not work? 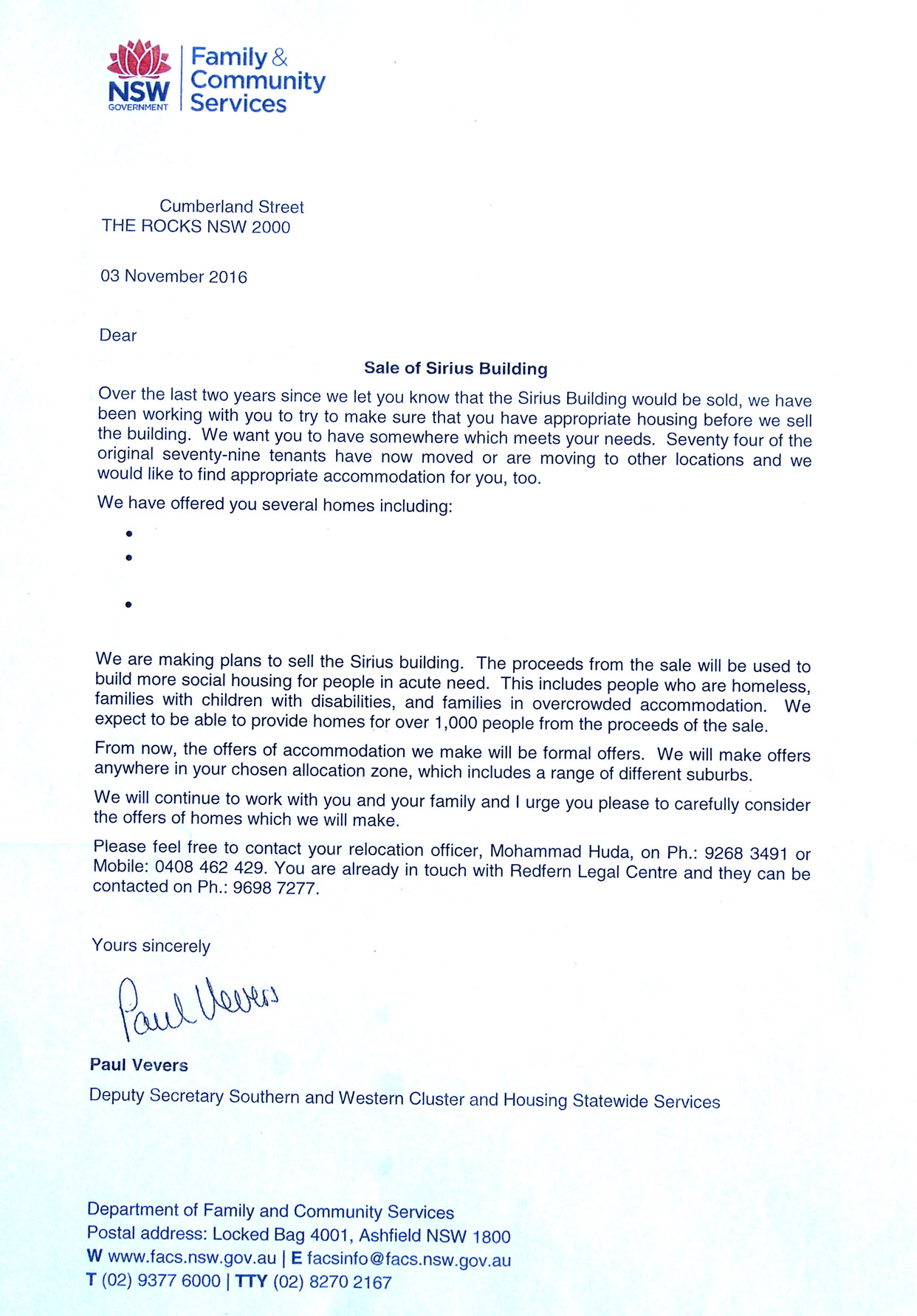