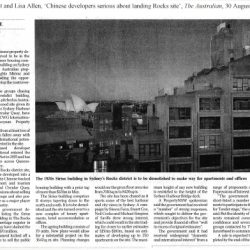 It has been reported in The Australian, that a shortlisted of developers has been for the future tender of the Sirius site.  The article has named three developers: Poly, CWG International, China Aoyuan Property Group as being shortlisted.  While a PropertyNSW spokesman said “The government has now short-listed a number of proponents to participate in the Read more about Update on Sales Process […]