The Daily Telegraph journalist, Sarah Keoghan, today covered our campaign to legally challenge the Governments decision to not list Sirius on the State Heritage Register.

“SUPPORTERS of the Sirius building in The Rocks have raised over $25,000 in a week for a legal challenge against demolishing the iconic apartments.

They have also accused the government of bullying the remaining tenants and supporters, as well as ignoring the advice of experts in favour of a quick cash grab.

The modernist block overlooking the Harbour Bridge and Opera House has garnered support internationally in the wake of government plans to evict the remaining social housing tenants and replace it with 250 luxury flats.

Earlier this month the NSW government rejected an application to heritage list the building, paving the way for its demolition.

Environment Minister Mark Speakman has turned his back on the campaign and Finance Minister Dominic Perrottet said he looked forward to the “demise of the concrete eyesore and the promise of a new, less brutal building on the site” 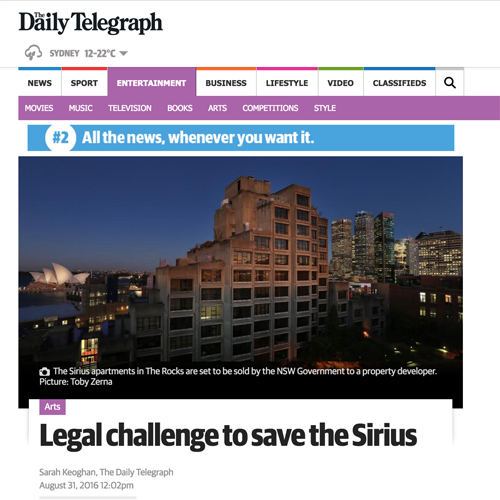